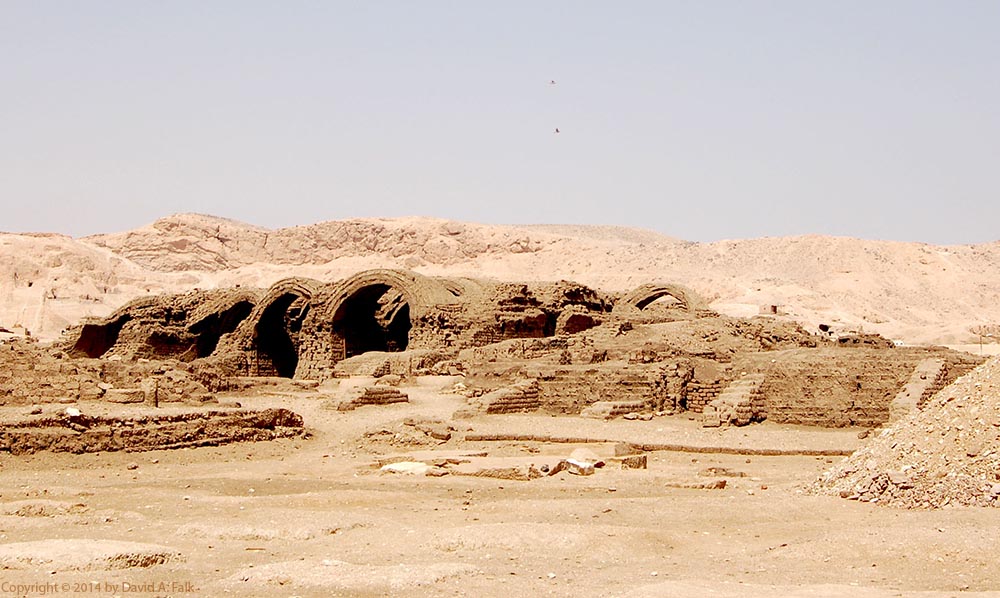 Pithom, also called Etham, was located in the Wadi Tumilat to the east of the Nile Delta.  Pithom was the third destination of the Israelite exodus (Exod 13:20, Num 33:6-8).  It was one of the cities where the Israelites built for the Egyptians mud brick storage magazines like those at the Ramesseum (see photo above). In ancient times, the road between Piramesses and Pithom would have been about 65 km (40 mi) or about 2 days of travel by foot.  The wadi provided way stations for semi-nomadic tribes from the Levant.  And like the delta in general, the city had a significant Levantine Asiatic population during the Second Intermediate Period. A recent excavation of Tell el-Retabah showed that the site was only sporadically occupied at the beginning of Dynasty 18.  During Dynasty 19, Ramesses II built new fortifications at Tell el-Retabah to control the flow of Asiatics into Egypt.  He also built a Temple of Atum, from which the site gained the epithet pr-tm ṯkw.  The meaning of this new epithet, Pithom/pr-tm is “house of Atum,” named after a creator god.  The city fell into disuse during the Saite period (670-525 BCE). During the Old Kingdom/First Intermediate Period, tribes of Levantine Asiatics sought entry into Egypt via the Wadi Tumilat and Pithom.  This was especially true during times of famine.  When they left Egypt, the Israelites simply retraced the path that many Asiatics took when they entered into Egypt.

This website uses cookies to improve your experience while you navigate through the website. Out of these, the cookies that are categorized as necessary are stored on your browser as they are essential for the working of basic functionalities of the website. We also use third-party cookies that help us analyze and understand how you use this website. These cookies will be stored in your browser only with your consent. You also have the option to opt-out of these cookies. But opting out of some of these cookies may affect your browsing experience.
Necessary Always Enabled
Necessary cookies are absolutely essential for the website to function properly. This category only includes cookies that ensures basic functionalities and security features of the website. These cookies do not store any personal information.
Non-necessary
Any cookies that may not be particularly necessary for the website to function and is used specifically to collect user personal data via analytics, ads, other embedded contents are termed as non-necessary cookies. It is mandatory to procure user consent prior to running these cookies on your website.
SAVE & ACCEPT